I was recently reading one of the car magazines that I subscribe to and came across an article about new technologies.  These included things like thin-film solar panels on the roof and new windshield displays, along with five other new whiz bang features

I grew up in the Star Wars and Star Trek era where I hoped as a kid to be driving a land speeder by now. However, I also spend a small fortune each year repairing and fixing used cars.  If you haven’t had to pay to put in a windshield into a Mercedes Benz S550 with rain sensing wipers then you might get excited about solar panels on the roof of a car.  If you have had to fork over $1,500 or more for a windshield than you get where I am going with this article.

THE COST OF NEW TECHNOLOGY

New and improved technology is fantastic, until it is out of warranty and it breaks down.  The labor costs alone on many vehicle repairs are getting obscene.  There are franchise dealers in Denver charging $165 to $200 an hour just for labor and these are not to repair your Ferrari, but your daily driver.  When you add in the cost of expensive parts, suddenly the cost of ownership outside of the manufacturer’s warranty can be crazy high.

One of the new technologies that were mentioned in the article were putting batteries in the body panels.  This sounds like a great idea conceptually and it will probably even work.  Do you want to be the sucker though that buys that vehicle and pay the bill to insure the vehicle?  Think about the added cost when someone runs a red light and plows into the side of the car.  The body shop wouldn’t just be replacing a door or a few panels, but battery packs inside a door and panels. If sellers think they are getting screwed by a bad CARFAX now after an accident is reported, just wait until this new technology hits the market.

How about shock absorbers that turn energy created from a pothole into more miles per gallon?  Let’s be honest because most of the cars on the road today ride like crap because nobody wants to spend the money to replace their vehicle’s existing shocks or struts.  It’s already an expensive repair unless you are a gear head or mechanic and you can do it yourself.  Now add the additional complexity that the engineers want to add for better fuel economy and most used vehicles will need new shocks like they need new tires.  Only the majority of drivers won’t have the extra money to replace them.

Google, Apple and other Silicon Valley companies are investing heavily into the automotive industry.  The big automotive manufacturers are starting to embrace the “geeks” in California and their highly profitable business models.  Let me forwarn you now that you had better grab your wallet and hold on tight!  You may find in the future that leasing a vehicle is the only option that actually makes financial sense.

If you are enamored with the brilliance of Silicon Valley, you apparently haven’t had your kids break their, made in China, iPhone yet out of warranty and have to replace it for $200 or $300?  Have you seen the upgrade Tesla offers on their batteries for the older roadster at $25,000 for 350 miles of juice?  Who is going to flip the bill if you own an autonomous car from Google when it breaks down?  These companies are run by billionaires who know how to earn a buck off of the masses. I see the word “sucker” when I read about sone of these new whiz bang technologies.

An air suspension ride on a Mercedes Benz or BMW is fantastic until it goes out and you have to buy new air bags.  I see first hand how many people have to get out of their expensive vehicles when repair bills start cleaning out their bank account.  If the cars of the future continue adding more expensive technology that can and will fail it will get far worse.  One of the things that made Luke Skywalker’s Land Speeder such a cool ride was the simplicity of it.  It might be time for the car manufacturers to remember the old marketing saying, “less is more”.

Which is one of the reasons why buying older vehicles or classic cars that someone can fix up is starting to make much more sense for many people.  If you’re not going to lease a new one to share in the risk of repairs with the leasing company or the manufacturer with a lower monthly payment, why not drive an older and much cooler car for a far less overall cost of ownership. 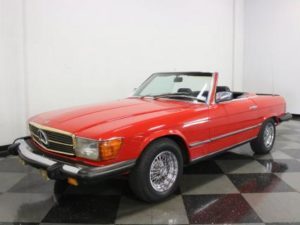 I am getting more requests from people to help them find older classic cars, even like a 1979 Mercedes Benz 450SL that you can pickup for under $15,000 most of the time in pretty good condition.  It’s like getting the movie star look on a Wal-Mart budget and people are starting to realize that these vehicles are not going to depreciate in five years like the newer vehicles are doing in a year.  It’s something to think about isn’t it?