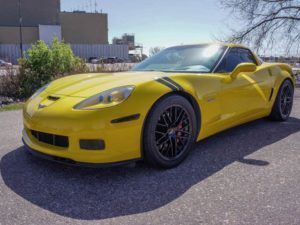 I recently consigned a really cool yellow 2006 Z06 Corvette for a client and I decided to  feature it here on CoolCarGuy.com, even though it probably won’t last very long. . These are super cool cars that tend to hold their value extremely well based on supply and demand.  One of the great things about the corvette is that it’s an American icon as a motor vehicle.  There is no mistaking the Corvette when you spot one driving down the road and Chevrolet has been producing it for a very long time. 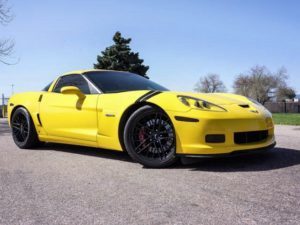 This particular vehicle has the 7.0l V8 that produces 505hp.  My client also had the following modifications done to the vehicle, but nothing that would affect the overall value of the car.  The wheels are the factory ZR1 rims with Nitto tires. Air Raid exhaust. Full cat back. It also has the carbon fiber ground effect parts (side skirts), but my client liked the way the vehicle looks better without them installed.  He’s including them with the vehicle to the new buyer, should they want them.

The miles are great on this one at just under 21,000 for a 2006.  It’s also the hard to find yellow with black stripes and it is in superb condition.

This is vehicle has a 6 speed manual transmission and is a blast to drive!  If you’re looking for a really cool and super fast American sports car the Chevy Corvette is probably the best value available for the horsepower and the overall value proposition. 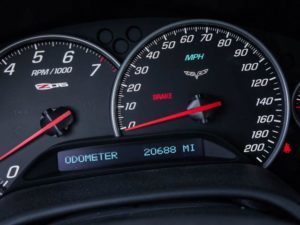 I am expecting that it won’t last long on the market since so many owners keep their corvettes for a long time. Corvettes have been being built by Chevrolet for over 60 years and they have built close to 1.5 million Corvettes over six or seven generations.  The majority of them have been really good cars and a few have been pretty terrible.  The C-6 platform that was from 2004 to 2016 with the LS7 engine in 2006 was definitely a winner!

The Z06 came on the scene as a 2006 model in the third quarter of 2005 and is the lightest of all the Corvettes. The Z06 was equipped with the largest-displacement small-block ever produced, which was a new 7.0 L (427 cu in) engine codenamed the LS7.  The Z06 was the official pace car for both the Daytona 500 and the Indianapolis 500 in 2006.  Car and Driver magazine did a road test of this amazing vehicle and called it a “supercar” that helped fuel the desire for this bad boy…