BEWARE OF THE INSURANCE COMPANY YOU KEEP

Each year I get calls from clients who have gotten in an accident and their car is getting repaired or totaled by the insurance company, but they have questions for me about getting a replacement vehicle.  However, what I’ve discovered is that the insurance company is more often than not pulling a fast one on them for replacement cost on their vehicle.  What people don’t realize is that insurance companies used to be able to do a scheme called “title washing” on vehicles, which means that they would take a vehicle that was a total loss and send it to another State to get registered and presto change’o it would have a clean title.

“In North America, vehicle licenses are normally issued by individual provinces and states. Each operates under different regulations.

In some cases, the criteria to define a “total loss” vary – some base the cutoff amount on the nominal value of the vehicle in working condition, others look instead at the value of a working vehicle minus the value of a collision vehicle as scrap, salvage or parts. The percentage of the original value at which the “total loss” label is applied also varies.

These differences are sometimes exploited by schemes such as “title washing“, in which a vehicle branded as ‘junk’ in one jurisdiction is registered in another, moving from state to state until one state with slightly different regulations brands the same vehicle as ‘salvage’ but repairable. A vehicle with Arizona registration and a ‘salvage’ title for salt water damage would, for instance, represent a red flag as a vehicle possibly once affected by environmental conditions and events elsewhere such as Hurricane Katrina. Vehicles with salt water or hurricane flood damage often have severe corrosion and electrical problems which cannot be properly repaired, so are best avoided.” 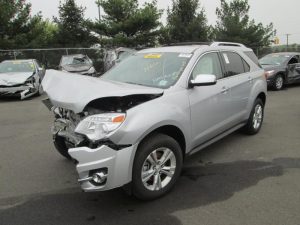 This is much more difficult to do today with the introduction of CARFAX, AutoCheck and State Laws that have changed.  The rising costs of vehicles has created a situation where insurance companies are much more reluctant to total out a vehicle that has been damaged.  I had a neighbor a few years ago, who was in an accident with her Ford Explorer and the vehicle had over $24,000 in damage that the insurance company did in repairs instead of calling the vehicle a total loss.  When my neighbor came to me because the vehicle had major problems to trade it there was no way that I could get her near Market Value for her vehicle.

Who would want to buy a used Ford Explorer without a clean CARFAX and that had $24,000 in repairs?  So the insurance company got a great deal by not totaling out her vehicle for her, while my neighbor got screwed and lost thousands of dollars when she eventually traded her vehicle.  This happens more often than people realize and many States no longer will allow you to go back to the insurance company and ask for diminished value.  It’s nice that the Insurance Lobby has done such a great job getting our politicians to represent their best interest instead of the consumer.

Another example recently was a client of mine who had a Scion XA that was in an accident and in this case the insurance company did total out their vehicle.  There was a problem though because their nice little car that they had purchased new and barely drove only had 50,000 miles on the vehicle.  In order to replace it for the amount of money the insurance company had given them, they had to find one similar with 80,000 miles on it.  When they contacted me, I showed them that the insurance company had only gave them 5 cents a mile for the low mileage on their vehicle!  If you leased a vehicle and went over the miles you would pay anywhere from $.15 to $.25 per mile, which at 30,000 miles would cost you a minimum of $4,500 in depreciation at the low end.  The insurance company though made out on that deal and only paid them $1,500 for having a vehicle with low miles.

MAKE SURE YOU HAVE GAP INSURANCE

I had a client a few years ago who purchased a really nice loaded vehicle from me.  They ended up getting in an accident and the insurance company pulled a fast one on them and told them that it was worth less than what they owed on the vehicle.  There was absolutely no way that was possible and they only contacted me after they had already settled with their insurance company, so they were totally screwed over.  The insurance company didn’t include GAP insurance to pay off the loan and they had declined it when they purchased the vehicle from me, which I usually offer for a few hundred dollars at the time of the purchase.  However in this case, they should have been fine because of the value of the vehicle compared to their loan and the insurance adjuster had booked the vehicle out wrong and gave them trade value instead of retail value on the vehicle.

One more story that illustrates the benefits of having GAP insurance.  I have a great client who is a lawyer and I leased him a new Nissan Maxima a few years ago.  He was in an accident shortly after he had leased the vehicle.  He called me first and I reminded him that he had GAP insurance built into the lease to cover the cost of the vehicle and pay off the loan since the vehicle was seriously damaged.  I suggested he let his insurance company know this and that he didn’t want to have this vehicle going forward because of the damage and it was a new car.  That’s a benefit of leasing a vehicle by the way because had he owned it, he would have had a vehicle that was smacked for resale and it could have been a problem down the road.  Since he leased it, he could give it back to Nissan at the end of the lease period and walk away unscathed.  Anyway, he worked with his insurance agent and the vehicle ended up being totaled and he called me back and had me get him a new BMW.  That was pretty cool.

WHAT SHOULD YOU DO AS A CONSUMER

Just be sure you understand what kind of insurance you have because if you end up having to use it you can find yourself in deep water.  Also be aware that looks can be deceiving.  This photo of this 2009 BMW 6 series is of a vehicle that was rebuilt from a salvage title, which means the vehicle was totaled by the insurance company like the vehicles above.  An insurance company isn’t going to stroke a check for a vehicle and lose thousands of dollars, unless the vehicle was whacked.

The money you save on premiums for cut-rate insurance you could very quickly lose and then some and I see it more often than I would like.  It could be even a big name company, so know what they are doing before you have to use the insurance you are paying for.  This is one of the benefits of knowing this industry.  Also, not every manufacturer lease includes GAP insurance like they used to, so make sure you understand what you have in the way of insurance, financing and leasing structure, so that you don’t get burned.  If you don’t have GAP on your lease then check with your insurance agent how to cover a potential loss on a leased vehicle you have insured with them.