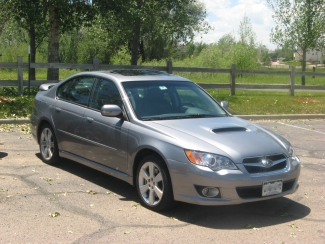 A couple who are clients of mine, Mike & Debbie Walker sent me a double shot photo of their vehicles that I helped them purchase, along with a few additional photos of Debbie’s 2009 Subaru Legacy GT Limited.

Actually, it’s a pretty funny story how I met Mike and Debbie to help them get their vehicles.

Mike Walker had contacted me early last year about a 2005 Pontiac GTO that I had on consignment.  It was a midnight blue color with black leather interior and a pretty sweet ride with plenty of power.  You can see photos of it here at CoolCarGuy.com, if you search on the keyword Pontiac.  It was a very cool car with 400hp and a 6.0l engine that could light up the pavement and was super fun to drive.  It ended up going to another client of mine from Europe, but that’s another story. 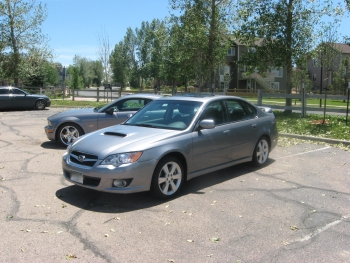 He came over and took the GTO for a drive and it reminded him a little too much of the Pontiac G6, instead of the classic GTO because of the body style. Mike was looking for something with that older muscle car flare like you find with the new body style Mustang, Challenger, Charger and the all new Camaro.  If there was one mistake that Pontiac made when they brought back the GTO that was it, they didn’t go Retro, but it doesn’t matter now that Pontiac is a classic car company under the new GM.

After driving a few vehicles, Mike decided that he wanted me to go after a 2006, Ford Mustang GT coupe with 300hp as his new ride. I tracked one down for him and you can see it in the picture above.  I got it for him through the Dealer Auctions that I have access to through hanging my license at a car dealership instead of being a vehicle Buyer’s Agent like some of the guy’s are around town and it was exactly what he wanted.  In fact, it was like special ordering a used car that I’ve done for many people over the years.

That was not the end of the story though for Mike and Debbie.  Mike went home and told his wife that he had purchased a vehicle from some guy who called himself The Cool Car Guy, a John Boyd, and  Debbie said, “I went to High School in Hudson, WI with a guy named John Boyd, what did he look like?”  Apparently, I fit the description.

I turned out to be the same guy Debbie went to High School with about 1,000 miles away from Denver and we had both moved to this part of Colorado years ago.  Fast forward and Debbie and I ended up being friends on Facebook earlier this year.  If you’re not on Facebook, it’s a pretty cool free service that another client had turned me onto using.  I didn’t realize that I had sold her husband their Mustang!  How funny is that?  She wrote on my wall that I had helped her husband and she wanted to trade her Subaru, so I helped Debbie get a 2009 Subaru Legacy GT that she now loves.

The vehicles look pretty darn cool together and I asked her to send me some photos of them, which she did.  They are now here for you to take a look at and enjoy.  Obviously, Debbie sent the photos since there are more photos of her vehicle than Mike’s.

John is an auto consultant with his license at a car dealership in Denver, Colorado. He can help you save time and money on any make or model, new or used, lease or purchase – nationwide! Call or email John about your next vehicle! jboyd@coolcarguy.com or Twitter @coolcarguytarget=”_blank”>@coolcarguy