A few years ago I wrote an article about the problems with CARFAX and how it’s not a fool proof system for checking out a vehicle.  The problem of course is that most people think that it’s Gospel and fail to thoroughly investigate a vehicle from multiple sources before purchasing or selling their vehicles.  Since I first wrote that article, I have been contacted by television station reporters, who have interviewed me as an expert and individuals telling me their horror stories and challenges, asking for advice.  I can’t post all of the emails that I have received over the years, but here are just a couple examples that will give you an idea of what it’s like to be a “seller” instead of a “buyer” with a third-party website service devaluing your vehicle.

In other words, CARFAX and other online car history reporting services can be great tool for buyers, but it can be a nightmare for sellers when the information provided is not correct. The two emails I’m showing here are mild compared to some of the stories I have received where people have lost thousands of dollars trying to sell their vehicles that reported wrong information or information after they have purchased their vehicles.

My own vehicle is a great case in point on how CARFAX can miss the boat and give people the wrong impression about a vehicle and its history.  I purchased a 2010 Mercedes C300 4Matic off the show room floor.  When I recently pulled the CARFAX to sell it, the vehicles history show that there were two owners.  This is because I originally leased it, but I bought out the lease.  There were not actually two owners of the vehicle, but really just one owner.  The CARFAX doesn’t know this though because it just sees that a lease was bought out.  It doesn’t tell the whole story, but only part of the story, so someone buying it would think that two people owned the vehicle based on the CARFAX report instead of one person.  You can see the report below. 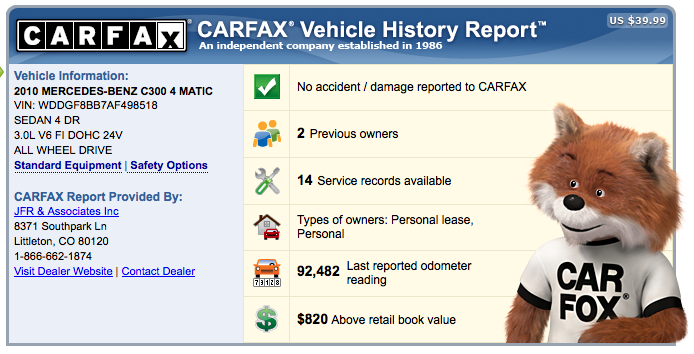 I read your piece on incorrect Carfax reports.  I am dealing with them on an issue right now similar to what you described in the article- they are reporting “structural and frame damage.”  The report has this accident happening 13 days before I bought the car- clearly I wouldn’t have bought it if that were the case, and the Carfax was clean at this time.  I’ve owned it for over three years now and haven’t had a problem at all.  I took it to a local auto rebuild shop and they inspected every part of it and said there is absolutely no structural or frame damage whatsoever.

I emailed their data team and have talked with a few of their reps- they said there next step is to discuss the matter with whatever entity reported the structural issue in the first place.  I feel like because it was so long ago I’m going to get almost certainly screwed.  Have you had luck with getting something like this removed before?

Any words or advice you can offer would be great.

My company is putting me in a fleet vehicle and I need to sell this car is I will have no use for it. When I took it to the Infiniti dealership to see if there was any price they could offer I was informed the Carfax was not clean, that is it been in an accident.  They indicated that they were surprised at this and pulled another auto report auto check, another version of Carfax which showed it clean.

They then took the car into the service area put it up on the blocks to show me that the screws all around the frame had not been changed and that the original frame had not been touched. I believe what they are saying about it never having been in a wreck that altered the frame. They indicated they were going to try to contact the Carfax people and changed Carfax but did not offer anything on the car.

I realize it going to an auto dealership is not the place to sell your car back, but I was shocked to learn about the Carfax situation. Do you have any advice for me on how to best sell a car that is in good shape 62,000 miles, and great working condition? Again I love the car, I just have no more use for it as a result of my companies changing the policy.

WHAT SHOULD YOU DO?

These situations are actually quite common.  Since I wrote the first article, CARFAX now has a “minor damage” report as well.  They used to just say “accident”, but many people still read “minor damage” and immediately think the vehicle is a lemon.  In other words, someone could have been bumped in a parking lot, had their bumper repainted and many people think the car is not worth what it should be anymore, which is ridiculous.

The fact is that Carfax is a third-party service and pulls information on vehicles, but it’s not 100% accurate.  It’s a tool to check out a vehicle and I always recommend that you check CARFAX and AutoCheck to compare the vehicle reports and have the vehicle inspected by a mechanic.  The second person’s situation shows that the vehicle is fine and the data happens to be incorrect at CARFAX.  I’m not saying CARFAX isn’t a good tool, but it’s not a fool proof service.  In fact, on their website they have the following disclaimer…

Indemnification. You agree to defend, indemnify, and hold harmless CARFAX and its affiliates and their respective directors, officers, employees, and agents from and against any and all claims, actions, demands, damages, costs, liabilities, losses, and expenses (including reasonable attorneys’ fees) arising out of your use of the Site or any information you obtain from the Site or its reports.

Much like Kelly Blue Book and other resources that have disclaimers for their services, CARFAX is just a tool to assist you in checking out a vehicle, but it can create a huge problem when people see information that they believe to be true.  It can greatly affect the price of a vehicle, when it’s accurate or when it’s not accurate and as you can see from the emails that I have received it can be very frustrating for the owner of a vehicle when the data is not accurate.

In the end, you need to trust, but verify the data when purchasing a used vehicle.  Sometimes you’re much better off just buying or leasing a new vehicle and keeping it for four or five years and letting someone else worry about buying used cars.