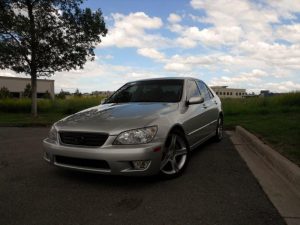 Here are some cool photos of a nice consignment vehicle that I recently sold for a client of mine.  I had quite a few calls on this vehicle and it was definitely the nicest 2002 Lexus IS300 in the Denver area for the money. The new owner is thrilled and he showed up with some cash and we financed the rest.  The vehicle had really low miles as you can tell from the odometer and I presented it properly to get it sold. It was super fun to drive and handle very well for the size of the vehicle.

As The Cool Car Guy, I sell quite a few vehicles, more in a month than many people will own in their lifetime.  I don’t sell every vehicle that people bring to me because frankly some people want too much money for their vehicles, more than the market will bear.

I also don’t consign just any vehicle since I have an indoor showroom and that space is limited.  However, I work with every make, model and price range.  I just need to find more time to put cool car shots up here on CoolCarGuy.com for my visitors to check out.  I like to have really nice vehicles to showcase for people, who are in the market for the right vehicle at the right price.  This 2002 Lexus is a great example though of a vehicle that sold because it was priced right and in fantastic condition.  They are difficult vehicles to find as well and my client made more money than had he traded the vehicle that would have been put outside by a Used Car Manager to be beaten-up by the elements. It’s always nice to create a win-win for the buyer and the seller.

I thought I would put the pictures up here for my visitors to enjoy.  The older body style on the Lexus IS was pretty cool and it’s a vehicle that is in high-demand because of the appearance of the vehicle.  It has a timing belt instead of a timing chain, so if you buy one of these make sure you get the service done regularly.  My client had all of the work done at the Lexus dealership and one benefit of that is that all of the service history of the vehicle is recorded within the Lexus dealerships database.

“The Lexus IS 300 made its production debut at the 2000 North American International Auto Show in Detroit. However, this car did exist in other markets under different names well 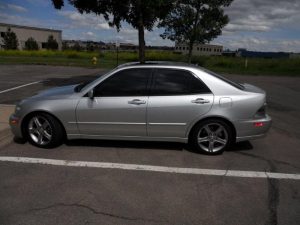 before it arrived in North America. The car is sold in Asia as the Toyota Altezza and in Europe as the IS 200, although with a smaller, less powerful engine. The IS 300 is aimed squarely at the BMW 3-Series; Lexus is hoping to prove that the best high-performance sedans don’t necessarily come solely from Europe. The addition of the 5-speed manual transmission enforces this hope.” – MSNAutos