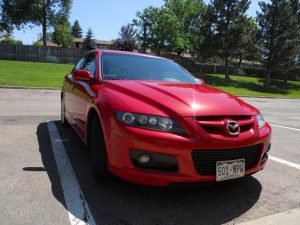 Here’s the “Cool Car Shot” of my current CoolCarGuy.com vehicle.  Maybe you’ve seen me cruising around the Denver or Castle Rock, Colorado area in this 270 horse-power 2007 MazdaSpeed6 Grand Touring.  It’s my 34th automobile, I’ve owned a ton of vehicles, and it’s really fun to drive!

Of course, it’s AWD for going up in the mountains snowboarding and it replaced my 2007 WRX that was my previous daily driver.  My wife Becky switched from her 2008 Subaru Tribeca to a 2006 Infiniti FX35, that I got an incredible deal on at the Colorado Dealer Auction with only 18,000 miles and hard loaded.  She got that vehicle around the same time that I started driving this Mazda. I bought this MazdaSpeed6 out of Arizona and talked my father-in-law into driving it back for me. 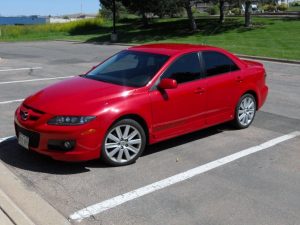 As The Cool Car Guy, I’ve owned and driven a ton of vehicles over the years and this one like the WRX is really fun to drive. It handles very well, not quite as responsive as my WRX was, but it also doesn’t have the road noise of the WRX.  That was the one problem I had with the WRX, even though I loved driving the vehicle, it was very light and responsive, but the road noise was a killer when on the phone with clients.

I put on a ton of miles each week, driving up and down the Front Range, picking up clients and vehicles from Fort Collins to Colorado Springs. I put on roughly 31,000 miles a year, so I switch in and out of vehicles quite often.  I’ve had this one for almost a year now and I’ll probably be looking for a new ride again pretty soon.  Someone will get a deal when I sell it because I’m big into maintaining vehicles.  I can’t afford to be without a vehicle in my business.

The MazdaSpeed6 was only made by Mazda in 2006 and 2007, so they are pretty hard to find.  I may be leasing a new Mercedes, BMW or Audi next time around or I’m going to find another unique vehicle like this one as a replacement.  I now have around 36,000 miles on it, so it’s about time to let someone else take it over and drive it until the wheels fall off.  I can tell you that this vehicle will handle it.  They seem to be pretty bullet proof with an average MSN Autos user rating of 9.7, which is incredible.  I take good care of my vehicles, but I also use them :).

The Grand Touring has leather, this one is equipped with an ipod system and of course it has heated seats, a great little turbo to give it the horse power and it was designed by Mazda as a competitor for the Mitsubishi EVO and Subaru WRX STI only not has much horse-power.  On the flip side though, I’ve been getting around 25mpg to 27mpg with this ride!  Try getting that in one the Subaru’s or Mitsubishi’s. 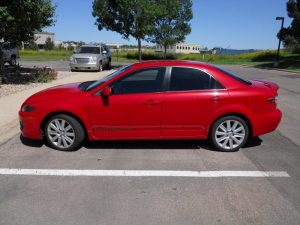 Here’s what MSN Autos has to say about this vehicle…

“The MAZDASPEED6 is Mazda’s all-new high-performance all-wheel-drive sedan, based on the Mazda6 sedan. The MAZDASPEED6 comes in two trim levels: Sport and Grand Touring. With looks very similar to the Mazda6, the MAZDASPEED6 has an all-new front and rear fascia, hood, front fenders and taillights. The hood sticks out to accommodate the intercooler and a hood scoop has been integrated to feed outside air into the engine. Extended side skirts, twin tailpipes, a lip spoiler and lightweight 18-inch alloy wheels with high-performance tires help complete the aerodynamic look to the body. The MAZDASPEED6 rides lower than a standard MAZDA6 and the double-wishbone front and rear multi-link suspension setups have been tweaked to further enhance handling.”