Last week I got a phone call from a client who asked me to help him sell his 1990 Porsche 911 sports car. When he showed up I couldn’t believe how good of shape it was in for the year of the vehicle. It only has 65,800 miles and it’s the Targa with the great top that is easy to pop off for driving on sunny days.

I asked him how long he had owned the vehicle and it turned out that his wife and him had purchased the vehicle in 2004, but discovered that they didn’t drive it that much. In fact, they bought the vehicle with 63,575 miles 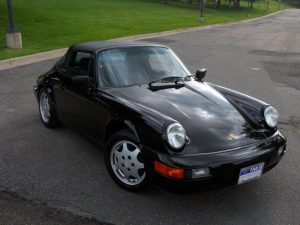 on it, so they only drove it around 2,300 miles for the past six years! Talk about a rare find and this is a classic looking car with the black on black color scheme. These vehicles are really hard to find, especially with good miles on them.

Today, I had a call from someone who is looking for one, so I told him I would put some additional photos and details up here at CoolCarGuy.com to check out. I had hoped to put them up sooner, but I’ve been slammed today and this week. 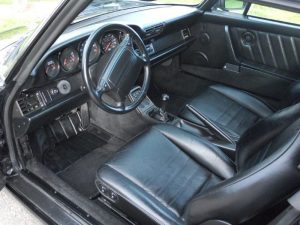 The Porsche 911 Carrerra 4 Targa had an original MSRP of $70,900. Here are some of the specifications on this vehicle, along with some additional photos for my visitors to check out. It has a super clean interior and looks and drives great.

Details: “The 911 is Porsche’s iconic rear-engine sports car, produced today in coupe and cabriolet versions that was updated for 2009. The 911 first went into production as the 1964 911 Carrera, Porsche’s first six-cylinder model and a replacement for the legendary Porsche 356. For 2004, a 40th Anniversary edition was offered and the Turbo Cabriolet and the Carrera 4S Cabriolet were added, marking the first time since 1989 that a Turbo Cabriolet was offered.

The 2005 Carrera and Carrera S debuted the next generation of 911, an evolution of the original 911 silhouette, with a return to oval headlights with separate turn indicators. The Carrera 4 and Carrera 4S returned for 2006, followed by the 911 Turbo and GT3 for 2007.” – MSNAutos