Hoss and I were at the Starbucks today near Park Meadows Mall on Yosemite broadcasting The Cool Car Guy Show live. It was a crackup because there is a constant flow of cars to check out as they blow through the drive thru.  I must have saw at least ten people who I knew, including clients pass by, which was pretty funny.  Apparently, many of my clients are huge fans of Starbucks.

We talked about a number of issues, including Chrysler being pretty much given to FIAT or at least 20% of the company for a kiss and a promise. Why didn’t the U.S. government offer the company to Ford, since they were giving it away? We also talked about what’s going on in the automotive industry and saw some very cool cars passing by, including a nice looking Infiniti G35x being driven by a client of mine, a Lincoln MKX, a Porsche Cayenne and a number of other cool cars. You can click on the link below to listen to the show, which is about 40 minutes in length.

We’re going to be creating the show on different days of the week at unique locations, but it was pretty fun at Starbucks since that place is a money machine with a constant flow of traffic, so you’re going to want to follow The Cool Car Guy on Twitter – @coolcarguy or both Hoss and I on Facebook to find out where we’ll be on any given day. I’m thinking we’ll be at the same location next week, weather permitting. You never know where we might show up and at what time because our schedules are nuts! 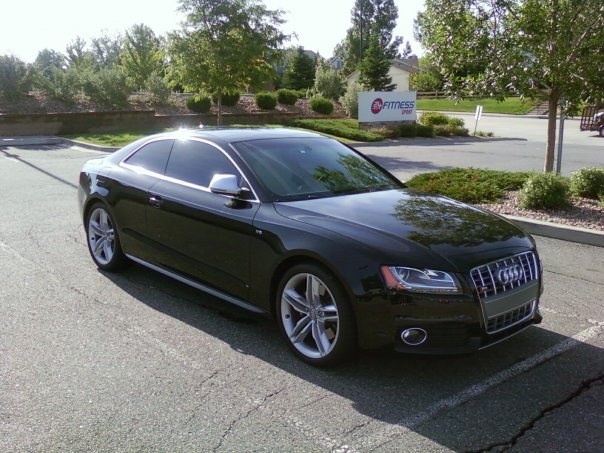 I finally tracked down a vehicle for my wife Becky to replace her Subaru Tribeca and I’ll be bidding on it for her next Tuesday at the Colorado Auction, along with another vehicle for a client of mine. I met a guy tonight who is kicking around getting a 2008 or 2009 Dodge Challenger SRT/8 and that should be a fun vehicle to track down for him. We’ll see if he moves in that direction. I also need to find an Audi Q7 and I saw a nice one today, along with an Audi S5 that I had to take a picture of since it’s such a sweet ride.

If you’re thinking of calling me for a vehicle, don’t freak out about how busy I am because this is normal for me and that’s why people call me. If I didn’t know what I was doing it would be different, but I do this everyday, working with people to track down every make, model and price range. Give me a call or send me an email.