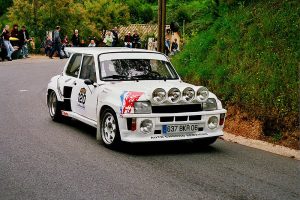 One of our visitors to CoolCarGuy.com sent me a video the other day and asked me if I would write something up about the LeCar, also known as the Renault 5. I figured, what the heck, especially when I found this really cool photo of one tricked out as a race car with a turbo from a race back in 2005.

Actually, a friend of mine in High School, Brent Niccum, owned one of these little cars and none of his friends, including me, could believe he bought it. Brent was 6 foot 4 inches tall and on the basketball team, so when he drove around this little car, it was like putting him in a go-cart and it looked like a clown show when he got out of the car.

I road in it many times with Brent and I have to admit that it was a pretty reliable little piece of machinery and fun to drive. I don’t remember him having too many problems with it and he really liked it. I’m surprised that Renault hasn’t brought it back into the U.S. Market with the recent four dollar gas hike we experienced last year. However, with it’s 44% stake in Nissan, they did come out with the fuel efficient Nissan Versa as a fuel efficient ride a few years ago. I’ve helped a couple of my clients get those vehicles and they really like them, you can even tow them behind a motor home, which is what one of my clients uses it for.

Renault made the first generation of the LeCar from 1972 – 1984, which is what Brent owned. About 1,300 AMC dealers at the time marketed them and American Motors (AMC) called it LeCar instead of Renault 5. It was designed to compete with the VW Rabbit and the tiny Honda Civic. Then in 1985 – 1996 they rolled out the second generation with a transversely-mounted powertrain taken from the 9 and 11 and a set of MacPherson Struts to beef up the suspension. I’m not sure that it actually did, but that was apparently the idea.

In the U.S. it featured a 1397 cc I4 engine that produced 55 hp, and a floor-mounted shifter was substituted for the dash-mounted unit. By 1977 it was popular among sports car enthusiasts and destined to become a classic. I found an ad that was pretty cool, since they dubbed it as Le Sports Car at the time. You can see it by clicking here.

Here’s the commercial I mentioned…