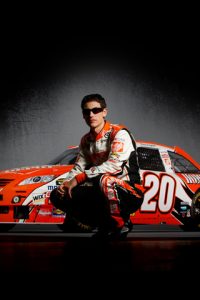 In case you missed the video of this crash that took place at the Dover racetrack this weekend, I thought I would post it here for you to check out at CoolCarGuy.com

Joey Logano, who is only 19 years old, crashed and flipped his Home Depot car eight times in the second race of the Sprint Cup chase at Dover.  What’s amazing is that he came out walking and was fine after the crash, which is a testimony to the technology that has gone into these race cars now.

Personally, I believe that God was watching out over this young man, somebody was praying for him because bad accidents don’t always end this positive where someone can walk away from their car after flipping over multiple times at high speed on the racetrack.

He said, “it was the wildest ride I’ve ever been on” and you can see from the video that it’s a ride nobody would want to be on and he’s grateful to be alive.

What’s ironic is that Tony Stewart was right behind him and bumped the No. 20 car during the race that set off the accident.  Stewart was driving the Home Depot car just last year and Joey Logano took it over this year.

Stewart now endorses Burger King and he apologized. He was pretty upset about the incident when he was interviewed over his in-car radio by the ESPN booth. “I wish I would have saw that coming,” said Stewart. “I don’t know how to say sorry enough to Joey.”

The reality is that accidents can happen at 150 plus mph and NASCAR driver’s, along with their fans, understand that is the danger of this extremely popular racing sport.

Even if you’re not a NASCAR fan, you’ll still find this video quite incredible.