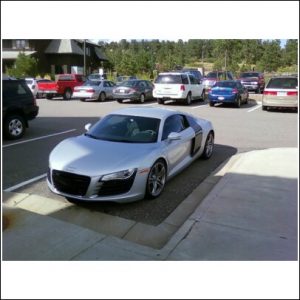 One of my friends pointed out to me today that I have turned a number of people on to one of the coolest videos on YouTube that you’ll ever see. It’s about the world’s fastest road car the Bugatti Veyron, but that I didn’t actually have the video or even an article about the car on CoolCarGuy.com.

Needless to say, I took a bit of a verbal lashing for that, so i figured I had better stop that immediately and make sure that I got the video up here for visitors to checkout.  I’ll put it at the bottom of this article and it’s from the show Top Gear when they had a chance to test this vehicle out on VW’s top secret test track in Germany.

The video is about 10 minutes long, but it is totally worth taking 10 minutes out of your busy schedule to watch it.  Even if you’ve seen it before, it’s over-the-top fantastic.  Probably the coolest car ever built for the road, but let me clarify that statement.

A few months ago, I was playing golf with some chaps from California. My friend Walt, had invited me to play in a charity golf tournament for the American Cancer Society at Pradera, a fantastic golf course I might add, and we had our picture taken with the coach of the Denver Nuggets, George Karl, who was there.  I don’t remember what hole we were on, but it was one of those deals where you could win a car for a hole in one or something like that and he spotted me as I came up since I was wearing one of my usual CoolCarGuy.com shirts.

He said, “CoolCarGuy.com, so you’re The Cool Car Guy?  Okay, Cool Car Guy, what’s the coolest car?” You know, when you have about ten seconds to respond to a question that everyone is waiting for you to answer, it was one of those moments, but I was ready.  After all, I am The Cool Car Guy.

Without missing a beat I said, “The Audi R8.” and everyone in my party looked kind of puzzled at me.  Come on, everyone has their favorite cars. As The Cool Car Guy I try to be an agnostic when it comes to cars because a cool car is really whatever is cool to you.  I actually tell people that all the time, “Whatever is cool to you makes it a cool car.”, but he asked me the question and I love cars – period, end of story.  The Audi R8 is one of those cars that is an engineering marvel and an incredible piece of machinery for the money, complete with carbon fiber and lots of super cool sex appeal.

However, I was also trying to think of a really cool car that I actually see around as well, like a Porsche 911 for example that is the R8 competitor. Not that there are not other super cool cars, from a variety of manufacturer’s, including the Nissan GT-R, which is another favorite of mine for the money, but I was thinking of cars that I actually see and go “I want to drive that!”.  Rarely, but once in a while I will see the Audi R8. And when you do see one, you say to the person next to you, “Wow.  That’s a cool car!” thinking it must have cost around $200,000 plus because it looks like it did.

The R8 is a car that starts for under $125,000 retail, actually starting at $114,200 for 2010, but they can go up from there and it can go from 0-60 in 4.4 seconds, with a top speed of 187mph, it averages 15 mpg with over 420hp and it looks like an extremely cool car.  You would expect a pro-athlete to own one of these just for kicks on their days off.  That would be the Audi R8.  I know, it’s not a Corvette, Viper, Ferrari, Porsche, Lotus, or any number of the American Muscle cars, that came to mind, but if you watch the video at the end of this article, you’ll see the reason why I picked this baby.

George looked at me, laughed and said, “An Audi. I thought only women drove Audi’s.” .  Which was pretty darn funny and everyone laughed at my expense, including me.  He was definitely a funny guy and I walked right into that one with my answer. I started thinking, “I don’t think he has had any of his players pull up in one yet and offer to take him for a ride.  If he did, he might have a different opinion of the Audi R8.  Maybe one of his players should call me and I’ll get them one.” At which point, it was my turn to hit the ball and to make matters worse, I followed it up with a less than cool shot off the tee box.  It was memorable though, which is why I decided to bring it up in this article about the Bugatti Veyron.

Now, in fairness to Coach Karl, the absolute coolest car made is definitely the Bugatti Veyron, but I’ve never driven down the road and seen one pull up next to me since they are $1.7 million.  So, I couldn’t really say that was the coolest car to the coach of the Nuggets because nobody actually drives them, except on shows like Top Gear in the video I’m posting here.  Even though, it’s without a doubt the most incredible car ever built for the road!  Just watch the video and you’ll see why.

However, the photos of this Audi R8 were taken recently in Castle Pines where I was going in to see my client at his jewelry store about his Mini-Cooper I sold.  Across the street, sitting in the parking lot was this super cool Audi R8 and I walked over and snapped a couple photos to put up here at CoolCarGuy.com.  Yes, it’s an Audi.  Enjoy the videos.