I get quite a few people who ask me about leasing vehicles because they want to have a lower payment when driving a vehicle.  First of all, I work with people from all walks of life and leasing is not for everyone.  You need a minimum 680 FICO score or a strong co-signer, but sometimes leasing can be an unbelievable way to solve an automobile payment challenge or eliminate negative equity.

Recently, I was asked by a friend to help a woman who was upside down on her high mileage SUV by $10,500!  She owed $40,000 on a vehicle that was worth only $29,500 and her vehicle was a 2009, so it was five years old at the time with miles that were to the point where costly repairs could start adding up.  She still had four to five years left on her loan, so her situation was really a disaster. I worked with a friend of mine and gave her a few options, one that included leasing a new 2014 Toyota Tundra Platinum at 15,000 miles a year and doing a five year lease.  This was not a manufacturer’s lease or something that could be done at the Toyota dealership to hit a payment that would work for her.

The second option was to lease a loaded Dodge Ram 1500 that I knew had $6,000 in incentives available through a great program that I could have used for her.  I know that some of you think it is crazy to lease a vehicle for five years, but keep in mind that people are doing six and seven year loans on vehicles now.  They don’t actually own their vehicles, so they are making payments to a lender instead of a leasing company.  They also do not have a guaranteed buyer for their vehicle five years from now, like you do with a leasing company.  Most people also don’t know that if you structure the lease properly on the right vehicle, you can usually get out within 42 months instead of going to the full five year term.  However, in both of these instances the numbers were pretty fantastic for eliminating $10,500 in negative equity. 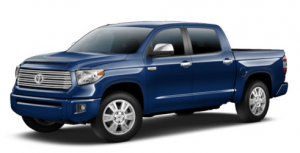 I’m not going to go into all the details on this article. As The Cool Car Guy, I’m like a magician and I don’t share all of my tricks.  What I can tell you is that she ended up selecting the 2014 Toyota Tundra Platinum.  She is now driving a new vehicle that is under the full manufacturer warranty and the truck shouldn’t require anything more than oil changes for the next three years and very little maintenance over the next five years.

Her payment went up only slightly compared with what she was paying on her loan, even with the additional negative equity that is now being wiped out.  At the end of the lease term or possibly before, she should be in an equity position of about $5,000 based on current auction sales of the truck she selected.   I need to mention that had she selected the Dodge, she would have been in an even better position because of the $6,000 in additional cash they had under a special program at the time.  Although she would have had about the same payment as the Toyota, at the end of the lease term, she could have had much more equity based on the residual value of the truck, current Dodge auction sales and the incentives on the Dodge.

It’s all about the structure.  So, if you know someone who is frustrated about their vehicle situation, just have them contact me and I’ll see if I can work some magic.