ne request that I get quite often from people is if I can help them find a cool car for under $10,000 for their teenager or as an additional vehicle.  Actually, most of the time it’s under $5,000 and they are looking for something cool to drive that is inexpensive.

I’ve owned over 38 automobiles and when I was younger, before Craigslist back when you only had newspaper ads to sell a personal vehicle, I would often buy really inexpensive automobiles drive them for about six months and then sell them.  The joke with my relatives was that I sold a vehicle before it needed an oil change, but that wasn’t actually true.

On the contrary, I would get virtually free transportation which was great when you were in High School or College.  I would look for vehicles that would hold their value pretty well, such as VW Beetles or Honda Preludes, Honda CRX’s and the Toyota Celica for example. I could grab one for $1,500 to $3,000 at the time, put some money into it with a tune up and a coat of wax or a paint job, drive it for six to nine months and sell it for a profit.  CARFAX was not an issue back then because nobody thought twice about a vehicle repaired in an accident.  Nobody had a clue about the history of the vehicle, unless they knew what to look for in the paint, frame, body, etc.

CAN YOU STILL DO WHAT I USED TO DO TODAY?

The key to my cool system for close to free transportation when you’re on a fixed budget is that you have to find high demand vehicles that have a cool factor to them for the a younger generation.  You don’t want super expensive vehicles, but vehicles that people can pay cash or have a very small loan to drive them.  Granted, not everyone is going to be able to do what I did and make money on their vehicles because you have to really know what you’re doing.  I’m just being honest with you that vehicles depreciate.  However, you can certainly minimize your losses, so that you don’t lose a ton of money on a cool car you’re wanting to drive by limiting the amount of depreciation that is taking place.

If I needed to unload an old BMW 3 series, VW Beetle, Honda Prelude, Honda Civic SI wagon it was really easy because there was always a market for these types of vehicles at a low price.  Nobody looked at the odometer of a 1972 VW Super Beetle back in the late 1980’s.  They didn’t care at the price point I was staying in for buying and selling those vehicles.  The same with a Subaru WRX or Mazda Speed 6 for example today.  As long as I wasn’t into it too heavy.  One such vehicle I think you could minimize your losses on is the older Mini Coopers that has the cool factor to it and are finally down in the price range where people can buy one and drive it for a while and then flip it with very little loss.  I’ve been watching them for quite a few years and I’ve been seeing them now going through the Dealer Auctions for under $10,000.  Sometimes I have seen them for under $5,000 depending on the miles and if they are a manual transmission or an automatic.

The majority of people don’t know how to drive a stick, which is really tragic and it’s also less costly to maintain than an automatic.  When I cruise through the Dealer Auctions looking at vehicles the amount of miles on the some of the manual transmissions can be really high, but the vehicles still look really good and are holding their value pretty well.

Like this 2011 Hardtop Mini Cooper that I recently spotted.  The problem though is if the clutch goes out on the Mini Cooper it can be a costly repair if you’re not going to do it yourself.  If you do it yourself, you will find Youtube videos about it and some after-market places like Pelican give you details on how to do it, but it’s a job labor wise.  Here’s a link to a good article from a shop on the costs to replace a clutch in various automobiles at Central Automotive in Kent, WA.  It’s a ballpark.

This Mini though would sell for about $9,500, which is under $10,000, but it has almost 149,000 miles on it. That is still a bit pricey in my book, but it’s because of the year.  I could probably get the dealer to come down on the price though if I was buying it for a client because most people don’t know how to drive a stick shift and the miles will scare most people.  That’s just a quick example though.  The bigger issue with these vehicles is if you should get an S with the turbo or a standard Mini without the S.  I don’t think it matters that much depending on the price point because a turbo can go out and cost more money and if you just want a cool car to spin around in the non-turbo is still fun to drive.  You will definitely pay a premium for an S on the used market that you won’t on the standard model.

WHAT ABOUT THE CLUBMAN OR THE COUPE 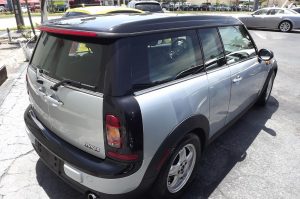 MINI has come out with quite a few models since bringing back the Mini Cooper.  I’m starting to see the Clubman, which is the bigger station wagon mini with the doors that open in the year showing up for under $10,000 now as well.  Which is pretty cool, but the newer version is much more like a MAXI than a MINI, but the 2009 I spotted had only 55,000 miles and again was under $10,000.  This is another vehicle in the Mini world that could be a nice option.  The one I put photos of here was an automatic.  Personally, I like the classic MINI much better than the additional models they have added to their lineup, but to each his own. 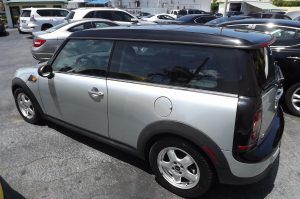 What about reliability and maintenance on older vehicles like these?  It really depends on how many miles the vehicle has and how you take care of it.  I get people who contact me about selling their Classic Cars or giving them tips about owning some of their older vehicles all the time.  It’s true that there can be some costly repairs with these vehicles, like a clutch replacement or a rear main seal, but many times you just have to use some common sense.  If you don’t want to do the work yourself then shop around. 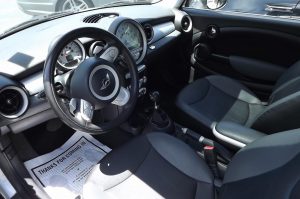 The point of this article though is that there are now plenty of cool little Mini Coopers and other cool vehicles on the used market that are getting into that first car, teenager or extra car for better gas mileage price range.  At the time that I wrote this article, a quick search through the Manheim Dealer Auction revealed over 330 different Mini Coopers that were available for under $10,000 on average.  That’s quite a selection to choose from, which I thought was pretty cool and worth mentioning in this article.  I will probably put some other vehicles here that are under $10,000 that I can help my clients and followers find.