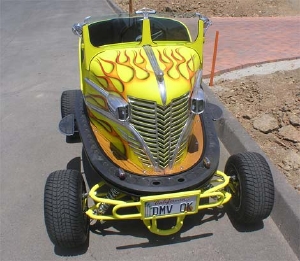 I was going through my emails today, deleting the thousands of SPAM email that I get on a monthly basis and I came across this email that I had received from a friend of mine, Bruce Nelkin, a few months ago.

It included some really cool photos of bumper cars, of all things, that have been turned into street legal mini cars by a California gear head.  They come complete with custom paint and would be a great addition to any car collector’s personal emporium as a talking point. 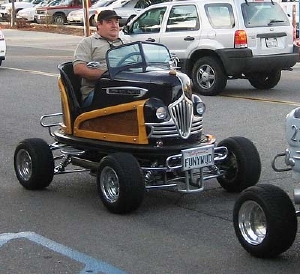 The photos were so cool, along with the story behind how these miniature vehicles came into existence, that I had to share them.  So, I thought I would post them here at CoolCarGuy.com for my visitors to check out.  Enjoy the photo shoot and see what you think.

You have to love the passion of people when it comes to creating cool cars. Like this guy, who invented these neat little rides, out of old bumper cars of all things!  What a great idea and they really look awesome, plus they are fully functional and road worthy. 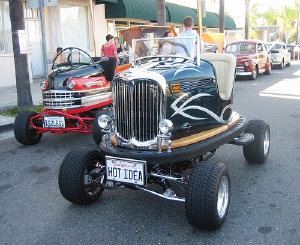 These are some super cool cars in my opinion and “kudos” to the guy who built them.

Here’s what the story is behind them that came with the email and the photos.

“It’s easy for a gear-head to be discouraged about the state of the world, especially in times of Carpocalypse and Cash for Clunkers.

But occasionally a bright light of awesome renews the spirit.

Road-legal bumper cars do just that.

Yes, you read that right; these little beasties are street legal. They run on either Kawasaki or Honda motorcycle engines and co-opt vintage bumper car bodies into the most awesome form of mini-car we’ve seen in too long. 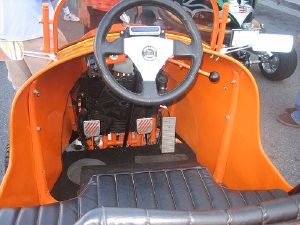 There are seven of these little monsters floating around  California , and they’re all the creation of one man, Tom Wright , a builder in the outskirts of  San Diego  who figured the leftovers of the Long Beach Pike amusement park needed a more dignified end than the trash heap. They were

originally powered by Harley motors but they rattled like hell and Tom replaces them with Honda or Kawasaki 750’s and a couple have been measured as capable of 160 MPH , which is terrifyingly fast in machines with such a short wheelbase.” 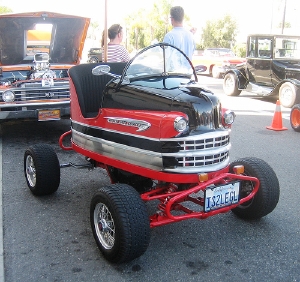 I would have zero interest in getting behind the wheel of one of these vehicles and zooming up to a speed of 160MPH. That sounds like a fast way to end up in the boneyard to me. However, the fact that they can reach those kind of speeds is incredible.  I don’t doubt that they can do it either because of the power plants found in Honda and Kawasaki 750’s, but can you imagine going even 100 MPH in a vehicle with such short of a wheel base, as the writer of the article mentioned?  Yikes!

I imagine that they get pretty darn good gas mileage too and with the bumper car component of the vehicle, they probably are a safe little ride. I wonder what they did to add seat belts to them or if they left those out of the equation?

They sure are very cool little cars and I’m sure they are a hoot to scoot around town in. Definitely a year round vehicle for California or the warmer parts of the United States where cold weather doesn’t come into the picture. 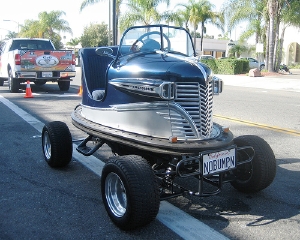 I always find it fascinating what people are capable of creating in their garages. 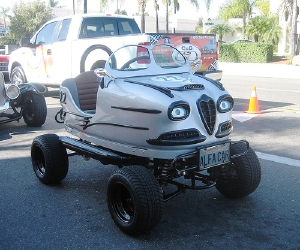