This weekend I sold a super cool black with tan interior 2008 BMW 535 with X-Drive to a couple that was looking for this exact vehicle with these options.

The person who consigned this vehicle with me was the former Marketing Director at a large dealership in town, but she called The Cool Car Guy to have her sell her vehicle and she was able to get the price she wanted for it.  She’s getting a Mercedes-Benz C300 4Matic that I have on consignment for another client later today.  It’s really cool when it works out for multiple parties and I can help two people sell their vehicles at the same time.

The people who purchased this vehicle paid cash and they were really impressed with the quality of this vehicle.   Even though it’s gone now, it’s a really cool vehicle, so I decided to list it here at CoolCarGuy.com with some of the photos that were taken when it was placed online for sale.  The 5 series BMW is a really popular vehicle here in Colorado and I have known a number of people who have traded in their Acura, Lexus and Infiniti to get into the performance of this vehicle.

The 2008 BMW 5-Series lineup was updated with a new nomenclature, a refreshed look and a redesigned interior. While the 525i and 525xi was replaced by the 528i and 528xi, they also receive a new 230-horsepower engine. The 530i and 530xi became the 535i and 535xi and was upgraded with a 300-horsepower twin-turbo inline-six engine.

It also included an updated STEPTRONIC that allowed for faster shifting and better efficiency.  You will notice in the photos that it was enhanced by a revised front fascia, the exterior also featured new taillights and a new rear air-diffuser that was really cool.

The interior was fitted with more storage space and a better ergonomic design since that was becoming a hot button for manufacturer’s in 2008.  Other features included a Lane Departure Warning system and Active Cruise Control with the “Stop & Go” feature.

This one came equipped with the new Sport Package that was available in the 550i that gave it the 19-inch wheels and new body treatments.  New optional wheels and tires were also available with the 528i Sport Package, but these are much more difficult to find on the used car market since most people won’t

pay the premium for the upgraded performance enhancements and options. 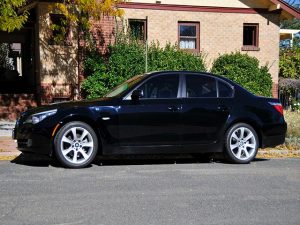